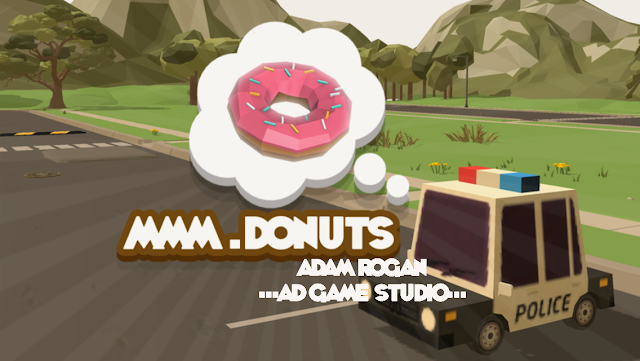 If you like the Pako games, but find them a bit too tricky,  Mmm.Donuts just might be your new jam.

That's not to say this a casual experience, but it's arguably not quite so hardcore as Tree Men Games' car chase simulators and parks somewhere in between, I feel.

Adam Rogan (AD Game Studio) recently served up a calorie-free, no charge treat on the App Store, that definitely deserves a taste test.  I mean, who doesn't like free doughnuts?
Homer J. Simpson enjoys donuts, and according to countless American cop shows and films over the years, so do many a police department across the pond.  Unfortunately here, for the player, you are a donut!

Much like the fantastic series from Tree Men, Mmm.Donuts is too an avoidance game where you are given chase by squad cars, except this time you take control of their favourite small, fried cake of sweetened dough.
There are many positive similarities to Pako.  Aside from the camera angle, visually it's not too dissimilar, there's the rocking looping music and Mmm.Donuts controls in pretty much the same way.  What's mostly different is, Rogan appears to have chosen to focus more on missions and less on the high score chaser aspect.  That being said, I've only actually seen three different types.  One of these is collecting 'x' amount of doughnuts scattered throughout the vicinity, in another operation you are required to reach a specified destination.  There are currently, but two targets.  Of course, all these also involve evading the police, and sometimes avoiding other moving cars and stationary obstacles as you navigate the area.  By completing missions you level up, and I guess, earn points?  These can later be spent on unlocking new donuts.  While all aesthetically appear different with their unique toppings, they seem to control the same.

If I'm going to continue comparing, then Mmm. Donuts may be lacking in a few ingredients.  There's no endless mode, yet only a handful of missions.  New areas are missing, and there's not even a pinch of power-ups.
Perhaps a slippery custard slick would have been a funny bonus?  The ability to squirt some sticky jam at windscreens could too be both a comical collectible and useful advantage to have had available.  Shooting some tyre-popping sprinkles in the path of those hungry, hungry police officers?  Well, that has the potential to be the icing on the donut!  Some cinematic-worthy jumps?  Now, they'd be a welcomed feature!
Just a few thoughts, which I think could give the game some longevity.  See, as much of a fun experience it initially is, things could soon become a bit stale if all was left as is, in my opinion.
Adam has updated his game a couple of times already, so honestly, who knows how long its shelf life will be?  It's certainly not past its sell-by date just yet.  Also, as I mentioned earlier, this game is priceless, so you might as well give it a try.  Despite compatibility issues, I did manage to capture some gameplay and if you rock an iPhone 6 or newer, thing should run smoothly.  Feel free to do a bit of window shopping below before you visit the App Store. Then
. . .  Get it while it's fresh!