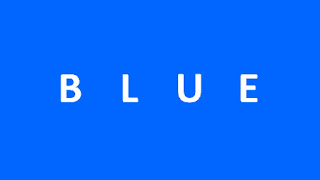 It's the simple things in life we tend to appreciate most; a hug, a sunset, a hot drink on a cold morning.
Yet, when I initially noticed blue (game) featured on the App Store, I merely gave its unassuming icon, but a fleeting glance.
I did later return and take a look at blue's screenshots, even read the description, then once more, I left it, on the shelf.
Luckily for me, a few days afterwards, I stumbled upon it again, this time deciding to at least spend some time with it.

Colour-me-interested.  Blue, is a modest compendium of abstract puzzles and its charm lies in its simplicity.  Not so much the game itself, but un the way it's presented.
From the get-go, the developer draws you in with a visually mesmerising introduction, accompanied by some rather chill music.
You're invited to play, and begin your journey through an enigma of fifty different brain teasers.  All sharing a common goal, to turn the screen blue.  This is achieved by manipulating shapes or/ and triggering objects.  Some are simple, other tricky, but all are different to one another and solvable, even if you become unstuck.  This is thanks to the inclusion of hints, should you require them.
I did manage to complete the game without any help.  Well, mostly.  On a couple of occasions admittedly, I did swallow my pride and take advantage of some aide provided.  Thought a relatively short game, I didn't complete blue in one sitting either and this was sought after returning to it, still utterly stumped.

The player can view an advertisement, in exchange for a hint.  There are, I believe, three per level.  Or they can get them for free and help support bontegames by purchasing a premium unlock.

I am not sure if I'll revisit Bart Bonte's blue (game) again in the foreseeable future, but I really enjoyed our time together and look forward to meeting yellow, red and black.  And who knows, after then, I may fancy a catch-up.  I see a rainbow in a monochrome sky in the making.
To conclude, blue is engaging, unique and I highly recommend you download.