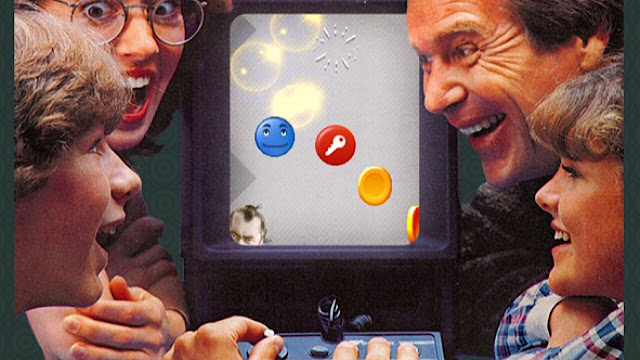 During a short introduction, James Bonk loses his head.  Luckily he that licence to bounce because our protagonist (James Bonk's head,) is going to need it.
And so, we set off on a series of missions to collect coins, dodge hazards and enemies, reach portals, then ultimately defeat bosses.
Missions are made up of ten stages, plus a boss-fight.

Manoeuvring is done, simply by swiping in whichever direction you wish to bounce on the screen or thereabouts.  This can be tricky, as swipes are not the most pin-point accurate ways of navigating.  Things begin pretty easily, but it soon becomes apparent, aside from the obstacles you need to avoid, that all this bouncing around comes with additional risks: A finite amount of oxygen being one.  Ah, well obviously, for how long can a head survive withouts its body?  And vice-versa?  Limited move number being the other.  These hindrances add varying amounts of difficulty to a level, depending on the players skill and a bit of luck.  Your success is measured by the generic three-star system and scored using how many of the available coins you collect en route.  There are also secret gift boxes hidden throughout, if you're up for another challenge.  These contain disguises, which can be later found in your wardrobe.  Each set of missions take place in a different location, and are absurdly themed accordingly.  You're dodging chattering dentures in Grandma's House one minute.  Whereas sometime later, you might be evading squirting ketchup bottles in 'The Fast Food Affair'.  I like how they change the music rather aptly.  A detail that's appreciated and did not go unnoticed.

Silly by name, sillier by nature.  James Bonk becomes more ridiculous the further you progress and is almost guaranteed to raise a chuckle or few, at some point in your adventure.  There's an air of Monty Python, even perhaps a splash of Johnny English.
This is a game that could have been released on iOS ten years ago, but that's not to say there's nothing new about Snakesoft's entrance to the App Store, and I'm intrigued to know what they're going to bring to the table next time.

Now I have briefed you on my recon, I've more missions to complete. bosses to demote, gifts to find and laughs to be had.  Why not grab your banana-gun, come take a swipe and experience some of this downright nonsensical slapstick espionage yourself?