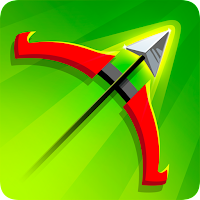 It was with Super Smash TV I found my love for arena shooters.  And now I have mentioned Williams’ wonderful creation, I’ve a sudden itch to set up my Super NES after finishing here.
On mobile, Lucky Kat Studios’ fantastic top-down rogue-like shooter, Trigger Heroes, scratched that itch for me, once upon a time.  Unfortunately, while simultaneously sucking the life out of my iPhone’s battery and relentlessly attempting to fry its processor.  So, see it was a fleeting romance.  Perhaps I'll check in on that old flame again someday.  In the meantime, Habby’s Archero has come to save the day!

Now, I know there are, and have been some fantastic twin-stick shooters on iOS (R.I.P.  Mini Gore *sad face*), some more akin to Smash TV, like the aforementioned and (almost came back from the dead) iDracula, to name but two.  Though, if you’ve been reading my blog for a while, you’ll know (and why) I’m a stickler for decent one-thumb, portrait mode iPhone games.
Back to Habby, saving the day.

Archero is also a rogue-like arena shooter.
*movie trailer voice-over* "In a world where evil has taken over.  A lone archer is the only force able to resist and defeat the endless waves of enemies.  Alone, they must overcome all obstacles in their path.  How long will our hero last?"
Not that long I'm afraid, as death of course, is inevitable.  But, they can start over.  Each time, travelling a little farther, collecting more gold and scrolls, enabling them to upgrade their skills and equipment, bettering themselves in an attempt to go again and beat that high score.
There's no back story here, but it isn't really needed, as what I've just shared is ample enough reason to keep coming back for more.  There are hundreds of maps to explore, and thousands of foes and hazards to battle.
Each run feels different, and the higher the level the more chance you get to see new stuff.  What I really like about Archero though, is that on the contrary to all that levelling-up ahead, the developers don't just drop you in at the deep end with nothing.  From the get-go you have a choice of three skills to choose from, and the fun thing, is all the experimenting you get to do with said abilities.  Some are better than others in any given scenario, it's up to the player to discover which to opt for and take a gamble at which will give them the upper hand.  Unlike some games, you don't feel stripped of your firepower at the beginning either, and despite the screen becoming hectic at times, Habby does a good job of equipping you with enough to make you feel like you've a fighting chance, no matter what the odds.
You only need one thumb to play this game, so pick your best one.  That will be your navigator.  Shooting is performed automatically when you stop.
Archero is free-to-play with in-app purchases, optional ads and an energy system  Energy is accumulated over time.  You begin with twenty, and each play costs five.  I've yet to play long enough to completely run out.  I'm still to reach level 50, so there's much more battling and exploring to do.  I feel I've barely scratched the surface, yet have put some hours in already.  Another great thing is, should there be a sudden cease fire, Habby gives the option of continuing right from where you left of, even if you’ve killed the app.  Watch my gameplay video below to see and hear more what it's like, and let me know if this is something you've played or are interested in downloading.  Either way, here's a link to it on the App Store.