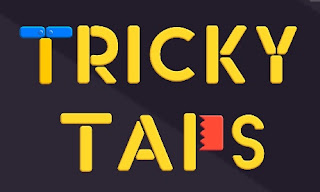 First released a couple of months ago and currently ranked 31 in Top Free games (ten in Puzzle) on the U.K. App Store, while simultaneously slipping under the radar, nobody appears to be talking about Crazy Lab's latest creation.  As Run--D.M.C. might say, "It's Tricky!"

Levels begin with an explosion of colour; streamers and confetti akin to those of a party-popper accompanied by a *clink*, as your ball is launched from a very famous-looking, though not so exclusive pipe.
There is a short tutorial, which uses pop-up prompts as your guide. From here on out, alone, you must navigate a selection of obstacles, scaling gaps and traps using your taps, to trigger things like flippers, and moving bridges too platforms, ultimately reaching a chute marking the end.  The taps are tricky, as sometimes you'll need to perform a quick tap, others long, then more of a hold or a certain combination of taps and holds may be required in succession.  This keeps things fresh.  Just when you think you've mastered the game, they'll throw a new or unexpected hazard in your path.
The circle encompassing your current level fills as you progress, indicating how near or far you are are to completion.  There's no timer, your score is accredited by how many stars you pick up along the way, there being the tried and true maximum potential of three per stage.  Gems are also scattered throughout.  Collect these to spend on new skins and trails in the store.  They are ranked by cost; common, rare, unique, legendary though appear to be only aesthetically different.  I've not noticed any game-changing affects.  But they do look pretty cool.  There's everything from a tomato skin to a star-struck trail.  Each time you perform a perfect tap, pointed out by a cheering pop-up, you grow a trail and appear to gather speed.  There are now also tubes that pour ice which speeds your ball up,  and those that spew goo, this slows you down.  Both can be a help or hindrance, depending on whether more or less velocity would be favourable at that point.   Each course is different enough to occasionally catch you off-guard, while not being too difficult to eventually complete.   I seldom felt so frustrated I'd give-up on progressing.  If and when you do become stuck, levels are short and tapping the replay button does a good job of getting you back in the action rather quickly, for one more go.
Completing level ten unlocks Endless Mode.  Here the difficulty is ramped a little, as each stage is now random and bailing means starting over.  The chutes that mark the end in the original levels are now checkpoints.  Except they're not really, as you cannot restart from one.  They're more a counter for your high score.  There are no breaks between checkpoints either. so soon as your ball disappears down the chute, does it reappear at the beginning of the next non-linear level.  Not only does this add replay value, but also a new challenge, should you feel attempting to complete level 60 for the umpteenth time or the grind of replaying completed levels for that perfect three star score is becoming a little too monotonous.

Since the recent update, there are (at time of press) now 160 levels.  More skins and tricks have been added to the mix, so now your ball can look sick while pulling off some new, well . . .  tricks!  There are also new backgrounds and a new .app icon.  Oh, and that goo-spewing pipe I mentioned earlier was also added.

There are banner ads, which I've found can make the game pretty laggy, at times even unplayable, whether I have my device's mobile data or Wi-Fi toggled on or no.  Of course this may not affect every model of iPhone or iPad.  If this lag is a common issue, the good news is the developers are working on a fix and so an update should be incoming.  They've certainly been actively working on and updating the game so far.  In the meantime, you do have the choice to revive by watching an advertisement.  An option some players may prefer.  Or you can spend £1.99 and disable them altogether.  A fair price.  Either way, you are never interrupted by any intrusive commercials during gameplay.  Neither, are there any cheeky in-app purchases nor subscription models.

I've enjoyed my time with Tricky Taps so far, and look forward to new content.  Though at present, I am only halfway through the 160 levels and hold a high score of 9 in Endless Mode, so much more gaming to be had, as is.  I'm not sure I've played anything like it on iOS and TabTale has certainly delivered a fun game for when you've a few minutes to spare.  Something Crazy Labs are no stranger to either. 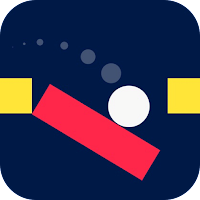