"The Spikes are back!!" A SpikeDislike3, for iOS Review. 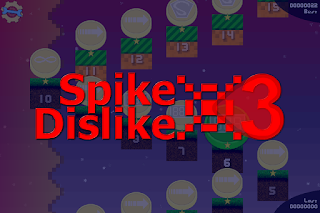 Well, it's been one bumpy ride, what with Apple's faux pas roadblocks outside their App Store and a crew of pirates (almost) burning bridges to Android.  But, hopefully this long-awaited sequel will be worth the journey so far for its developer.  Pot holes notwithstanding, he has certainly had fun making it and describes SpikeDislike3 as,

"All in all, IMO, this is the absolute pinnacle of SpikeDislike. This is as "nice" as it gets, and everything feels like it oughta."

After playing through all of the initial 150 levels and currently going back to 'star' failed challenges, too battling my way up high score ladders, I somewhat agree.  Here is why:
For those unfamiliar with Jayenkai's (J.N.K's) first two versions, the basic premise of SpikeDislike is simple; Bounce an orb over or under a series of spikes.
A ball bounces up and down automatically on one spot.  Your job is to move it forward by tapping, sometimes holding the screen.
Of course, mastering this spike avoidance game is not always so easy as it sounds, and timing's of the essence when bouncing your way past spikes safely, but so fast as you can.
Sometimes our protagonist takes the form of another character (Invisible Munky from Invisible Munky 2 fame, cameos,) as do enemy Spikes, but its concept remains the same.  At press, there are fifteen different themes to refresh your eyeballs, one every ten stages. 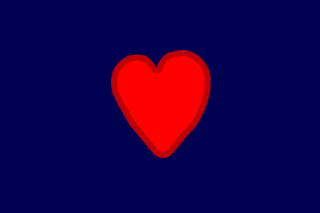 Roots revisited, SpikeDislike3 is a new improved version of its predecessors. Challenge mode has been reintroduced and incorporated into the core gameplay, sitting nicely alongside classic Infinite levels.
While new challenges, enhanced visuals and one tweaked physics engine change things up a bit, perhaps the most noticeable differences for me are those missing three lives!  I'm still unsure whether the irony of being greeted by that big red heart upon launch was intentional, or not.  Are you mocking us, Mr. Gamble?

So, I briefly mentioned earlier how this extremely accessible game can on the contrary be rather difficult, mastering.  Such a cliché, though please let me elaborate;
In addition to said subtraction of extra lives, Spike Dislike's combo-meter has also been 'shortened'.  Meaning with this edition, you now have even less time for passing spikes and chaining your combo.  All aforementioned noted, makes challenges more, say, 'challenging' while adding a sense of urgency to high-score-chasing infinite levels.
See, unless you're planning on playing all day, you will not likely achieve a high score making haste here.  There are many risk-versus-reward calculating, adrenalin pumping, also humbling moments in SpikeDislike3.  And, it contains enough of the familiar, too unseen, unplayed to attract both old and new players alike.

There are nine freshly coded mission types thus far which will have you going that extra mile, such as collecting presents, or hitting switches.  More examples of stages range from casually accessible "Pass 10 Spikes", to seasoned hardcore "Sheep Race" challenges.  Panic sets in when the pressure with racing a lamb while navigating through deadly spikes hits ewe you whilst going-all-ram('-bo')!  "Score" levels be puzzling everybody? 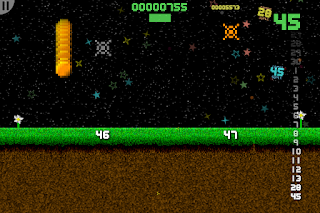 SpikeDislike3's gameplay is the smoothest yet.  It has never looked, or sounded so good.  And is meaner and deadlier than ever.  My new 'fave' SpikeDislike game, though I've since gone off mutton.
It's probably the best 79p, or equivalent you'll spend this week.

James is currently readying the first of potentially many updates for submission, adding even more content and tweaks.  He is open to suggestions for future themes and menu options, also very contactable on twitter. I wonder if an option has already been added so we can loop that superb (all-new-to-SpikeDislike) soundtrack?  Jayenkai once told me he doesn't like loops. Fingers crossed he's caved.

Also available on Windows, OUYA, in your favourite browser by way of  HTML5 (via gamejolt.com) and Google Play -so you can play it anywhere, with just one thumb, even on the toilet! 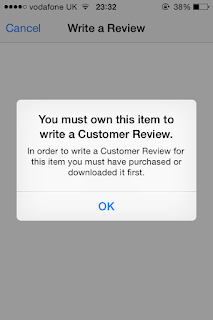 Apple still won't let you rate or review games on the App Store received by promotional codes!  They also seem to think I have not downloaded it.
Anyway, thought I'd post a mock-up of what would have been submitted here instead.  How do you like them  . . .  Apples?

SpikeDislike3 landed a couple of hours before Sonic The Hedgehog and I's birthdays.  @Jayenkai kindly gifted me one copy.  After much gaming, two days later my opinion was, it's only right to nominate it for GoTW.  @GAMESouthport were not aware of its release date, so @Jayenkai and I enlightened them.  Thanks for the Retweets, Faves and #banter @GAMESouthport!  (Whom may or may not sell this certain variety of fruity gift card with which you might be able to purchase a particular spiky game with.) 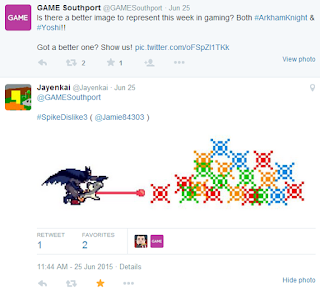 "Be The Ball." - Words of wisdom from Otakupunk!

Everybody Likes SpikeDislike><3, including Jane Jones!