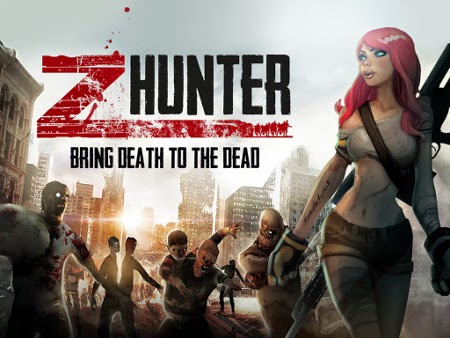 Bet you can't guess what the 'Z' stands for?  Okay, so video games are saturated in this particular theme ,and the format isn't quite new either.
It's a 'Freemium' title with assumably removable advertisements and in-app purchases.  There's an energy mechanic, timers, also in-game currencies.  Genera Mobile don't bring anything ground-breaking to the table (except maybe the bazooka shells,) but I've actually found it quite entertaining and playable so far. 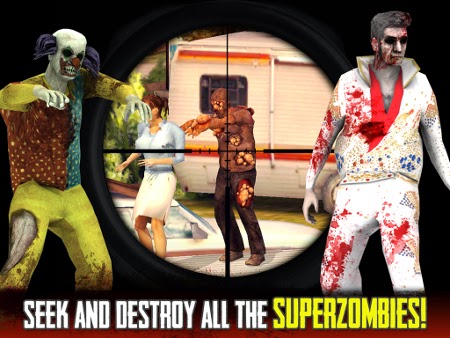 Developed by iOS developer David Liñán, Z Hunter: War of The Dead [Free] (formerly: Bring Death to The Dead) is an arcade shooter, one I really could envisage in a cabinet, complete with holstered infra-red sniper and machine gun down my local amusements.
It looks, sounds and plays just like one.  The only real difference being well adapted virtual controls.

Far as the story goes, there are a few pages.  Twelve to be precise, in the form of notes.  These can be unlocked, then read after fulfilling certain requirements.

Other than that, all I know is you play an ex-Marine in this zombie (apocalypse) survival First-Person (arcade) Shooter. Your duty is to seek and destroy all remaining zombies, rescuing the few survivors left.
As missions become more difficult, you will need to purchase and upgrade more powerful weapons. There are also useful supplies available to buy in the 'store' that will give you the edge, such as a radar or hollow bullets.

The player is briefed on navigating the menus and instructed how to play from launch.  Throwing you straight into the action almost.

After which time further campaign missions will be available, soon to be joined by three other game modes.
Daily Weapons lets you try before you buy a primary or secondary weapon from the store.  This is available every ten missions.  In Where Are The Zombies you must find and kill two zombies before a human civilian is killed.  This mode is unlimited and a way to earn the virtual money if you are finding it difficult progressing.  'Superzombie' is much the same except the zombies can mutate and take more damage making them more difficult to down.  There are four missions here, at least in the first two areas.

Whether all this changes in the next area, I have yet to see.  There are four in total, all set at different times; Jacksonville --12 Days Later, Caravan of The Dead --45 Days Later, Amusement Zombie --90 Days Later and Dead Port --180 Days Later.
With 40 plus campaign missions alone in Jacksonville, War of The Dead looks to pack quite a lot of content. Zombies, weapons, modes too have nice variation as do the different areas ,and the weather, even time of day differs.

More on the energy mechanic.  You begin with ten units and success, or failure, one unit is depleted per mission accepted.  All ten are refilled on ranking up.  There seems to be no clear experience tracker, aside from your level up bar, which appears to fill as you play the game. More energy can be bought with 'gold', or you can wait for it to replenish.
Weapons, supplies and certain ammo also cost virtual money or 'gold bars' ,and upgrades have timers which can be bought or waited out.

Your primary weapon is always a sniper rifle, secondary, a machine gun or Bazooka covering both ranged and close quarter combat.
You begin with a MOSIN M90/31 and AK-47.  Ammunition is free and unlimited, aside from the Bazooka shells which are unfortunately limited and overpriced in my opinion.  You can also accidentally kill humans if they are in range of the impact, so it's not always the best tool for the job.

A certain amount of grinding and waiting, or in-app purchases are required to complete this title.
You do earn currency, slowly ,and there is a daily bonus, just for playing the game.  Bonuses are also earned by pulling off head-shots.  There are also limited time offers on in-app purchases that may be worth a flutter.
I am finding it fun in bite-sized play sessions and will probably throw some money at the developer by purchasing something soon as Z Hunter is definitely worth more than the free price tag it carries.

While the game looks and controls just as well on the iPhone, iPad's bigger screen does make spotting your targets easier on the eye.  There's also sometimes a cool action-cam and 'slo-mo' feature when shooting zombies.  It's just a shame game save data doesn't carry over to each device you play on.  Headphones come recommended and will also help you determine whether a zombie is approaching from your left or right.

Whether or not it would be more appealing as a premium title, War of The Dead is worthy of a download at least.  That much is a 'no-brainer,' you up for a taster? 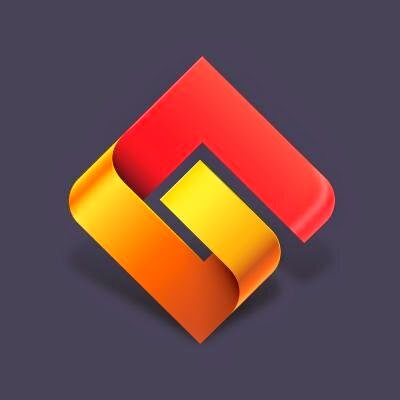