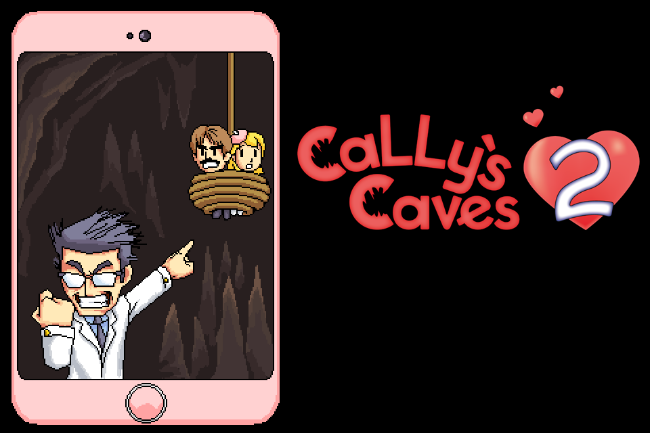 I seem to recall getting lost in Jordan Pearson's App Store first, Callys Caves [Free] last year . . . and not in a good way.
Given my early evacuation, comparisons to the newly released sequel will be sparse. That being said, there are a few noticeable improvements.

Callys Caves 2 [Free] also, is a tough as nails adventure-platformer that will have you glutton for punishment.

"Cally's parents have been kidnapped again!"

And once more it's "you" their daughter, who is to rescue them from nefarious Doctor Herbert's evil clutches and defeat him --for good!
Brave depths of over a hundred caves, before exploring his lair's hollow halls.
Along the way you'll encounter 20 enemy types and six diabolical bosses.
16 unique weapons will be yours for levelling up, as too various attributes with new RPG mechanics to upgrade.

Early on, a few things were clear; visuals had been changed, this time resembling something more from Sega or Nintendo's super mega 16-bit era rather than the early MS-DOS age.
I was getting lost again, but in a good way and at least always felt our protagonist was venturing towards the right direction.
There are automatic saves on cave exit and a level select map in the pause menu!
Both of the latter make this game feel more like a classic platformer. Where as its predecessor, though contained short-cuts to unlock, felt more perma-death.
Not that there's anything wrong with that, just different. In fact, I've since revisited and am having a lot more fun second time round.
If you have yet to play either, I'd actually recommend playing them in reverse order.

So, you start at home, passing through your garden heading towards the doorway in a tree.
This also happens to be a portal and first descent.

Armed with only three hearts sword and pistol, it starts off rather basic. Cally has no elaborate attributes either, but all soon evolves.
Right and left arrows are your forwards/ backwards, an 'A' button to jump, 'B' fire, 'X' mêlée.
All virtual controls work responsively, I've yet to press the wrong one by mistake or find my view obstructed.

As you run, jump, dodge and attack your way through the stages, portal-portal, entrance/exit-exit/entrance, Cally levels up, becoming more powerful.
So too does your weapon, depending on how often you use it ,and there are others to discover hidden within the caverns.
Orbs, coins and gems are found also dropped by your fallen foes throughout.
Collecting these is important as not only do they help with levelling up, but are your currency for the shop.
There, additional attributes and upgrades can be purchased.
You may want to loosen those purse strings too, as being a window shopper might not pay off.

Callys Caves 2's difficulty curve maintains a clever balance for the duration. As your enemies get stronger, if you play and spend right, so do you.
Always remaining tough enough without being game ending impossible, though you will die --a lot. 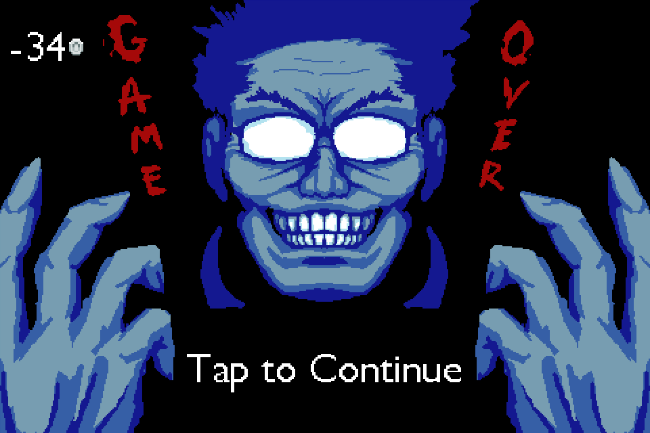 May as well get acquainted with this screen. He's not that scary after a while.

At occasional intervals you'll meet Lloyd, your guitar wielding guide. He will give you helpful hints and tips, even a suggestion you may have missed some secrets.
These can soon be realized and give a tremendous amount of replay value to one title alone, that has generous longevity in itself.

Keeping boredom and repetitiveness at bay aesthetically also instrumentally, graphics are varied. Each environment is a unique underground chamber, every monster type has its own behavioural pattern-attack-portrayal. There are different hazards to avoid. When you cannot look before leaping, faith and a little trial and error is required.
Similarly, it's fun experimenting with the assortment of weapons, as certain tools are better for specific jobs. Yours to discover, then made instantly available at the slide of an armoury icon.
The soundtrack also changes after pausing gameplay, which I thought was nice attention to detail.

With an intriguing story and some classic platforming action, Callys Caves 2 is a well built successor in the mini saga.
Completely free, yet more than worthy of the 69 pennies for additional gems, poison bullets and removal of ads I seldom noticed were there. 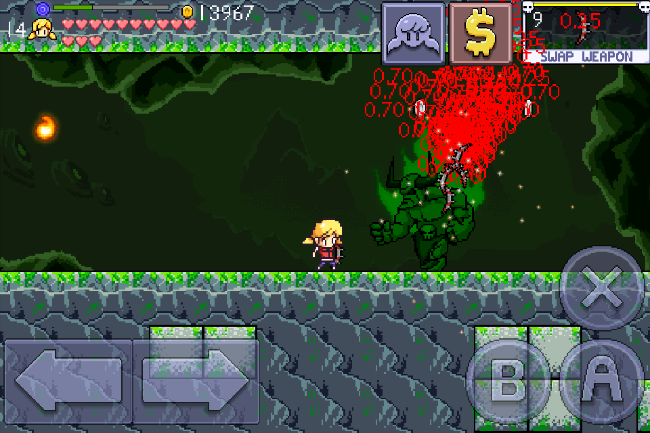