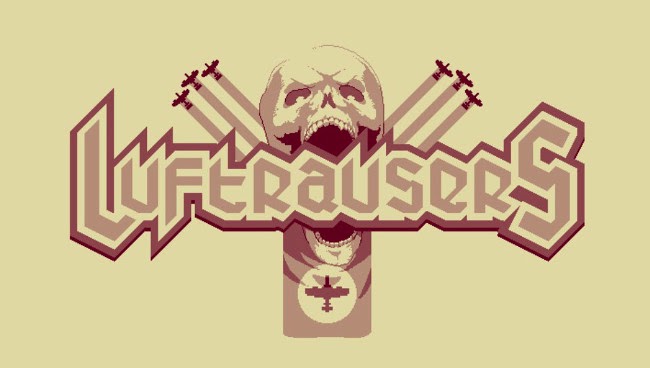 Genres, however vague and impersonal are there to categorise for us. They provide method, organisation too, making cataloguing also searching for something specific that much easier.
Sub-genres enable you and I to hone in on our target. The reverse act perhaps can at times not be so simple. Where do we put 'this'? Which describes 'it' best? That is where/ when occasionally on the contrary disagreements and arguments against tagging also labelling are made.

Luftrausers [£7.29] has been placed widely in the arcade shooter, or shoot-em-up folder and its files contain all assets expected from one, e.g. lone assault, large number of enemies, bullet dodging -check-check-check.
However as mentioned, this process can be rather overcast -that's where reviews come in. (Hopefully) giving a clearer view, detailing those blimps on the radar.
See some video games are what they are, and there's not much more to say, others... beg elaboration.

Upon launch Vlambeer's stylish arcade shoot-em-up looks as though it could possibly have been released back on the GameBoy Color what with its sepialike 8-bit graphics.
Post a couple of brief screens and training, okay maybe Nintendo DS? After some gaming, resolution then frame rate realisation ( -while also available for PS3, PC, Mac & Linux. ) Alright this would probably work better with PlayStation Vita, if we're talking handhelds at least.

Control-wise, more reconnaissance is needed as part of me ( my right hand mainly ) wonders if the mouse is master for a title such as this? Not a shocker though, given its flash ancestor.
That said, a d-pad or thumb-stick does work pretty well and if done right, mobile is always a bonus in my opinion.

The visual style is not uncommon, and while its sound effects may come across a little generic, Luftrausers' catchy upbeat soundtrack accompanies some rather unique gameplay.

Take the floaty manoeuvrability of games such as Atari's Asteroids and
Lunar Lander. Add some Bullet Hell enemies/ projectiles then finally a fictional war theme for RPG elements. Shake it all up in a snow globe and imagine yourself as one of those little plastic figures inside wondering what the heck is going on!?

As you bravely volunteer to pilot a Rauser and accept over a hundred dangerous missions, all while your admiral and some mad scientist apparently watch on nearby from their never-to-be-seen vessel.
Enemies you encounter take the form of fighter planes, battleships, submarines, rival aces and even blimps, each with their own projectiles and manoeuvres.

Ships, subs and blimps wait silently for you to cross their paths before raining down ( and up ) fire on you, while the planes will take chase and instigate dramatic dogfights.

The action is chaotic and in addition to outwitting your foes as you dodge also return fire, further challenges await.
There is no radar, and given the amount going on, your range of vision is poor. Enemy bullets do indicate their origins general direction, but most of the time you won't see a 'bogey' until you're both on a collision course with each other.
Want some precision d-pad/ thumb-stick movement controls usually associated with shmups? You can't have them! Thrust and turn pilot ...thrust and turn.

One rare, if not unique health mechanic is a cherry on the cake to dig your teeth into. In place of the more common health-bar and several lives, Vlambeer opted for a cease fire.
Damage taken is indicated by an ever decreasing circle encompassing your aircraft. Said circle decreases in size the more punishment you take and grows into oblivion when your health is full. To regenerate it and repair your Rauser, simply stop firing and get out of the way. This basically translates into, long as you can not get hit the one life you are given could be a long one.

Completing missions such as 'Encounter a blimp' ,and 'Destroy a battleship' unlock Rauser parts; super weapons, bodies and propulsion systems. Of which there are over 125 combinations.
These mix up the, '2D is about as deep as it goes' gameplay, and I've yet to settle on a certain combo. Whether this is due to the fact, there is no master mix ( endgame? ) or that the difficulty ramps accordingly I've yet to decipher.
Still -it's fun experimenting in the hangar before taking your new Rauser out for a test flight, albeit likely it's last. 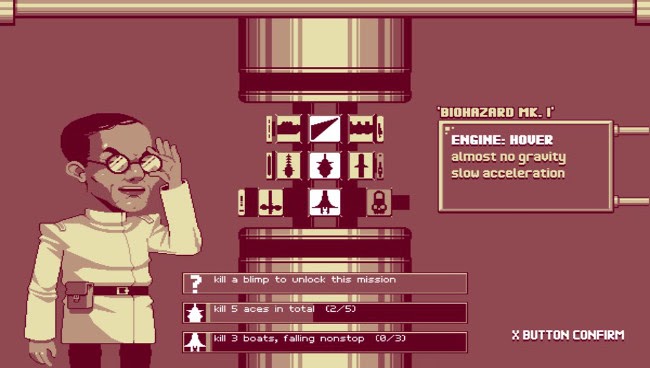 Fancy a change of scenery? There are three colour variations I've seen in the 'Color Palette' to unlock, plus 12 trophies and of course the obligatory high score tables.

While maybe not quite so surprising , what with Super Crate Box and Ridiculous Fishing in their back catalogue, Vlambeer have created yet another individual and addictive title in Luftrausers. 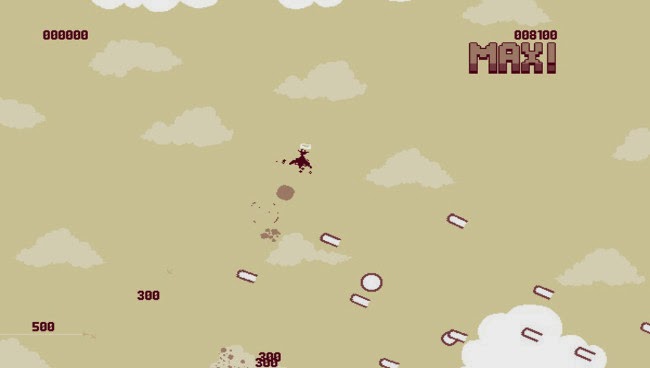