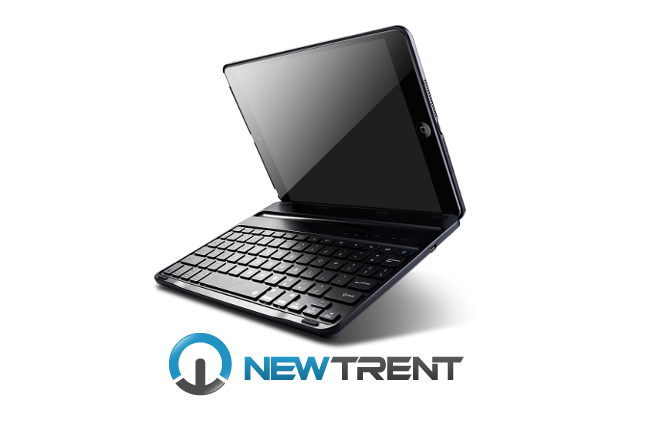 Airbender 2.0 from New Trent is a wireless keyboard case made for the iPad Air.

A mostly improved model of their first edition, this mid range product is multifunctional and retails for less than half the price of its major competitors without sacrificing quality. 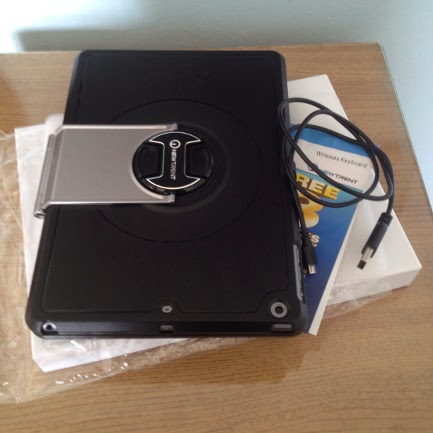 Sealed within sturdy white cardboard, not dissimilar to Apple's trademark packaging, in the box you will find the cellophane bag wrapped keyboard case itself, instructions, a flyer and USB charging cable.
The lead is neatly tied, then there's even a sheet of foam between keyboard and cover to help protect its keys in transit.

The leaflet offers one free three months warranty extension, while too detailing information on how to become a pilot user and test "free new generation" products.
A simple though thorough user guide's recommended for your perusal perhaps while you wait for the Airbender 2.0 to fully charge, this is also suggested.
*Charging initially takes about 6 hours, but thereafter just a couple or until the indicator light shows full.
[*You can use the keyboard while it's charging.]
Set up is relatively easy, after disconnecting from the mains, open the cover, snap in your iPad and adjust to a preferred viewing angle accordingly.
Next you need to pair the devices:
Switch the keyboard on, then press the connect button.
On your iPad go to Settings> Bluetooth and toggle the slider to on.
When the Air has found "Bluetooth Keyboard", select it and you will be prompted with a password on screen.
Type this in then hit Enter.
Pairing only need be done once, in future simply flick the power switch on the keyboard and enable Bluetooth on your iPad via Control Centre. 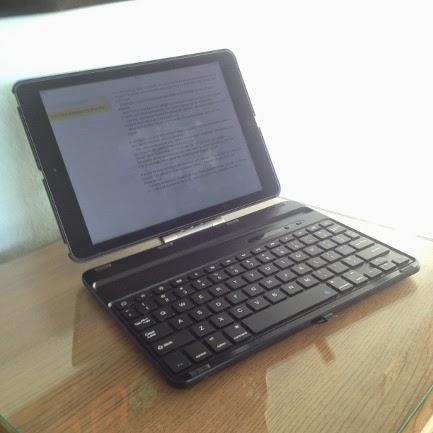 There is no lag whatsoever between typing and text appearing on screen. While battery life's difficult to calculate accurately, it does seem to last forever.
Useful shortcuts are worth becoming accustomed with, especially one clever sleep command ( all listed in the manual ) and after spending some time with your Airbender 2.0 you'll likely find it a breeze to set up then use.

Larger Shift keys and "new metal arm" are customer review acknowledged improvements, while the newfound absence of a Spotlight Search shortcut key ( said to be present on earlier models, ) is probably an only negative. That and one elusive pound sign! Previous editions were mentioned to sport a less durable/ supportive stand.

Most of the keyboard case itself it made from plastic, with rubber feet ( inside, also out ) and locking clasp. Airbender 2.0 carries some weight despite being slim, while I wouldn't trust any polycarbonate case protecting my iPad from a fall, it does feel built to last.
Personally, I found the keyboard size rather uncomfortable at first, but soon adapted.
New Trent's overall product design is growing on me and while I'm not a big fan of earlier said stand aesthetically, I've come to appreciate its functionality.
Opening, moving and closing the device did feel a bit awkward to begin with, but I suspect that's because it was brand new.
Not a deal-breaker, though unfortunately it is one fingerprint, dust and lint magnet. 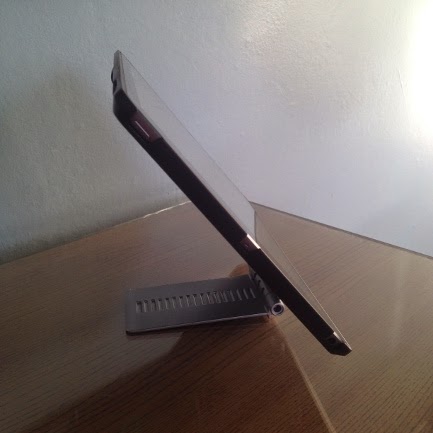 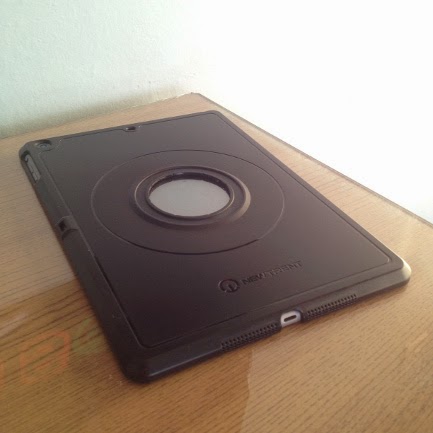 In addition to low cost and premium quality, arguably the most impressive feature of New Trent's Airbender 2.0 is its flexibility.
Not only can you adjust your 'screen' to any angle ( landscape and portrait ,) but you're essentially getting three products in one.
Though safely locked when in normal use, the 'lid' and 'arm' both detach completely, gifting consumers a case, also stand to use independently with their iPad, a separate movie stand and scratch-proof cover if you will.
It's also worth mentioning the cut-outs for all ports are precise, providing full access.

If you're thinking of trying a physical keyboard with your iPad Air, but don't want the commitment asked by more expensive brands, I recommend you check out Airbender 2.0.
Currently available on amazon via New Trent's website at only [$36.95]. ( UK customers can find it [here], or on eBay.) It will give you a fair idea of whether it's an accessory for you without breaking the bank.

Drafted and Sent from my iPad