HUVr Board: Fact or in fact 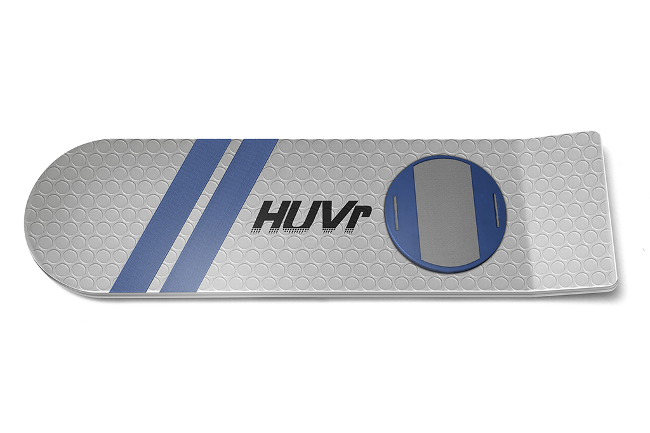 The homepage of said website claims, "The Future Has Arrived." Then begs a question, "What's your style?" Before permitting you a choice from currently four different hover board colour combinations, after which you're invited to share via email and/ or social networks; twitter, Facebook and Google Plus.
They state there's also the HUVr app "COMING SOON" which reads to be a tracker that connects via Bluetooth and maps your route, thereafter these are then shareable.
There's an About section introducing The Team before giving their readers a brief outline of who-what, also some quotes from "Customers and Partners", including Tony Hawk.
A functional Contact icon is present, as too are one Press Kit and links to their videos, in which celebrities are also involved.
These include Christopher Lloyd of Back to The Future trilogy fame as 'Doc' Emmett Brown and even a DeLorean makes an appearance.

So what's the story? Are hover boards finally going to be an affordable method of transportation for us all?
Or is this all some kind of extreme PR for a certain former Pro Skater's upcoming mobile game, widely reported to be currently in development?
Perhaps it has something to do with a new Heads Up Virtual Reality product? Or software for the Oculus Rift? Maybe Back to The Future IV? Even 'those boots' Nike are relaunching?

The latter few would make more sense ...right? Or nonsense, I mean April Fool's Day is just around the corner -this could all be some massive prank!
Whatever the reasoning, it's definitely got people talking.
Visit the site and check out the videos, if only to believe for a while.