"After my initial several sessions the irony suddenly occurred to me that perhaps OlliOlli's most used control was one shared by the platform originally intended."

So like many iOS gamers, I had been disappointed over OlliOlli's skip-to-Vita exclusivity, but only until shortly after it was actually in my hands.
Ok, the game technically would/ could have worked on iPhone, iPad and iPod touch -think Stickman Skater [£1.49] which uses virtual buttons with optional swipe controls for tricks also grinds. Later maybe controller support might be added?
Even now I'd welcome a port if it was ever legally possible, but there's something about the feedback you get from physical buttons, thumb-sticks and bumpers. Maybe a bit of nostalgia, even sentimentality is involved too?
Given this is the most fun I've had with a skateboarding release since Tony Hawk's Pro Skater on Sony's original PlayStation.

After my initial several sessions the irony suddenly occurred to me that perhaps OlliOlli's most used control was one shared by the platform originally intended.
While at first the control scheme felt a little difficult to grasp, somewhat alien. (Though my only recent acquisition of this handheld gaming console should be mentioned then considered.)
The one-more-go factor kicked in and it wasn't long before pulling off tricks, landings, grinds too almost became second nature. Not that I was suddenly pro, by any stretch of imagination, but progress was being made.
Shortly after, I could only agree with the developers/ self publishers decision to take Sony up on their offer -OlliOlli is meant to be played on PS Vita, it just feels right. 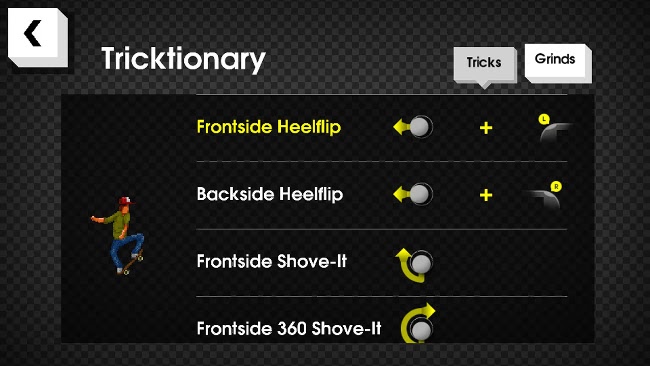 A simple clear display, with only a few menus then handful of options make for one clean, easy to navigate user interface.
Included is the Tricktionary, neatly listing all information needed to pull off every trick and grind with live animated figure references alongside.

The action takes place in a vibrant polished pixel foreground set upon an almost blurry lensed backdrop giving depth of field. Both scroll independently and ooze 2D retro 80s/ 90s style graphics, it's incredible to think all of it was hand-drawn.
Animations are smooth as your ride, with no noticeable lag in frame rate.
Sound effects are audibly satisfyingly authentic and bone-crunchingly accurate. This is in total contrast to the mostly chill albeit varied, always ambient soundtrack. 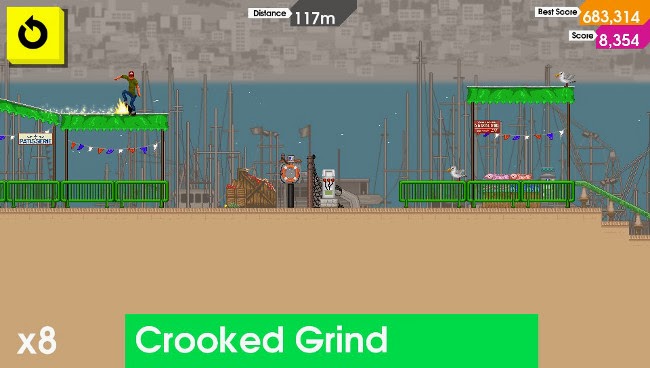 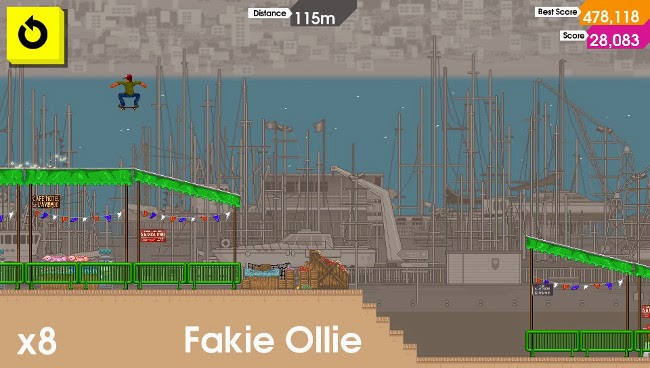 Post the excellent tutorials, you will find Career, within which there are five different stages each with their own unique levels and obstacles.
These are also split into Amateur and Pro sessions, containing separate sets of Challenges.
Then there's Spots Mode, each of which is unlocked when you finish a level. Here you have opportunities to chain massive combos over 50 different sections -beat the world and become King of the Spot.
Next, Daily Grind, where again you can challenge players worldwide for the number one highest score, except here Spots are changed every 24 hours. Practise so much as you like, but you only get one shot.
Last but by no means least, (or mean feat) - RAD Mode awaits. Available after you complete all 250 Challenges, anything other than a perfect grind and perfect landing this time results in a slam.

Of course slams are possible everywhere; mistiming tricks, misjudging gaps and obstacles, landing awkwardly even trying to skateboard on snow all can result in you losing points and having to restart the level or spot.
Players are rewarded for skill, also risk-taking and tempted into chasing perhaps the most difficult part of this game, attaining those high scores. You do this accumulating massive points by chaining ludicrous combos before making a perfect landing in-turn banking your score.
Aside from RAD Mode you do not need to make perfect landings, but failing doing so appears to have a dramatic affect on points awarded. 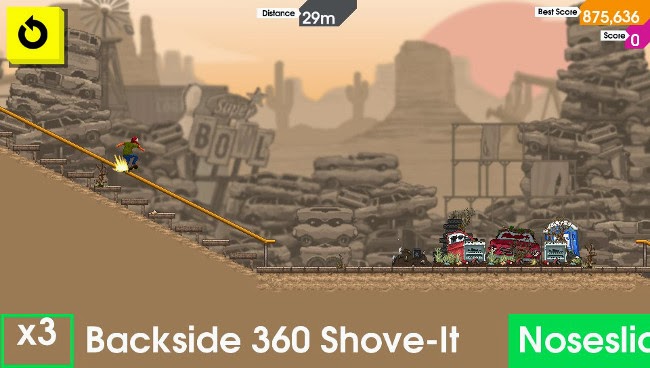 "You will slam on your face."
-Roll7 said, and you will but you'll get up and try again, many times.
Funded by Sony Computer Entertainment Europe (SCEE) as part of Shahid Ahmad’s Strategic Content Drive, I'd like to quote him here by saying because it is "savagely addictive" -couldn't have put it better myself. 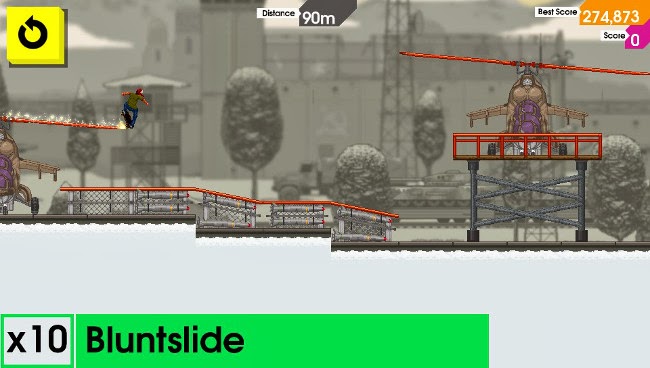 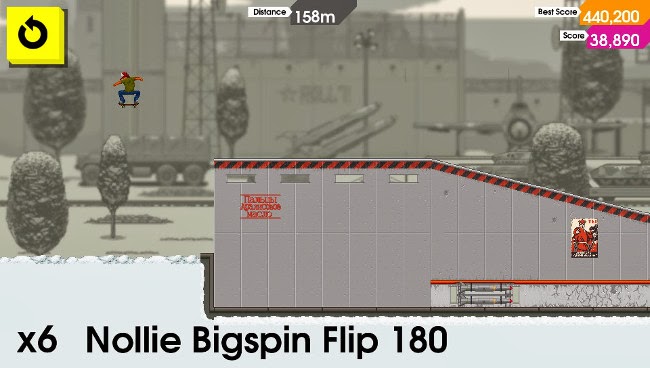 The game mechanics and control scheme are so fluid and responsive that any fails made feel down to yourself, but then so do the wins and the satisfaction felt more than makes up for the frustration endured.
'X' is used to push, tap just twice, you're at full speed. Tapping the same button as you land stores points earned and scores a perfect landing.
Moving the left thumb-stick alone and in conjunction with your console's left and right bumpers executes tricks and grinds.
There are over 120 to learn, then master within 100 deviously crafted environments.

In addition to all this content, 1 Gold, 3 Silver and 8 Bronze Trophies are also yours for the unlocking. 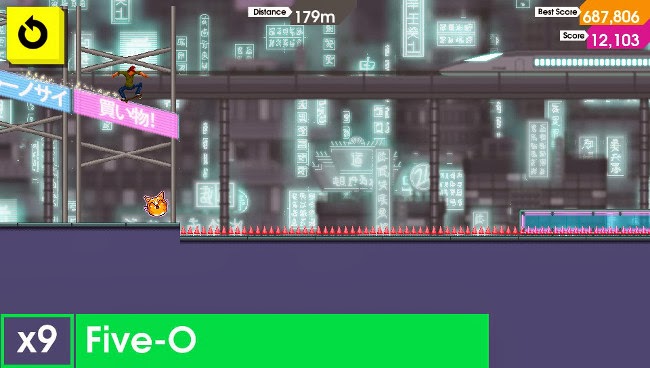 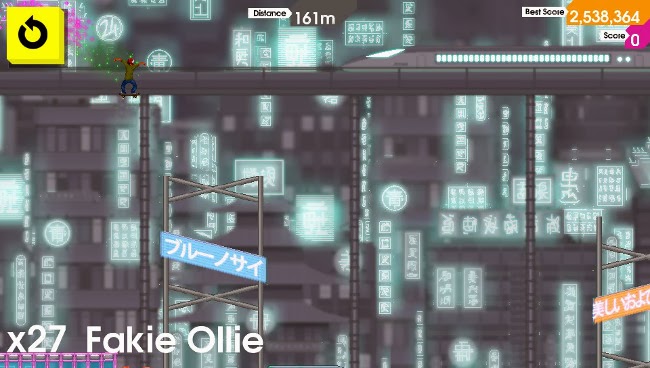 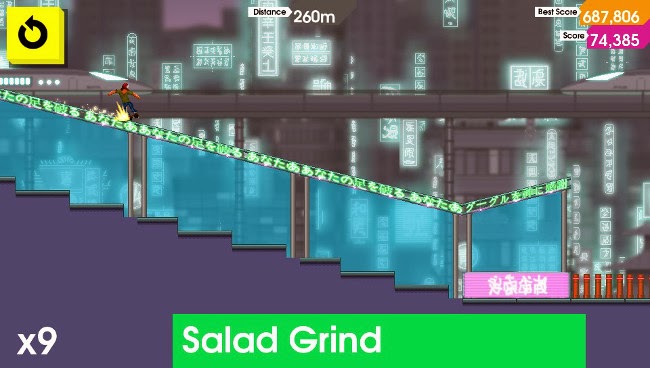 One of the great things I like about titles like this, is the fact you can jump in for five minutes, or spend an hour or so grinding away -literally.
In my opinion this makes the perfect game type.

Roll7 have cleverly constructed an extremely challenging and seriously addictive skateboarding game, added a ridiculous amount of
replay value, then somehow managed to pack in all into just 225 megabytes.

OlliOlli is now available on the PlayStation Store for only [£7.99]
Treat yourself, treat your Vita!