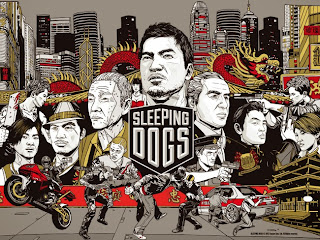 Developed in partnership by United Front Games and Square Enix London Studios then Square Enix published, Sleeping Dogs was one of those games I got excited about upon viewing it's trailer but subsequently distracted never actually getting around to playing at the time of release before forgetting all about it... until recently.

Dialogue of this 2012 title is in English and Cantonese, while the bilingual authenticity's welcomed I totally recommend enabling subtitles when tweaking your settings prior to starting a new game.
Beginning with a short opening cinematic during some drug deal gone busted, leading to the first bit of gameplay; Parkour/Freerunning, H.K.P.D. soon have you (Wei Shen) surrounded after valiantly attempting outrunning them.

Production quality is apparent immediately, while mini tutorials quickly help you become accustomed with controls.
Next, another couple of scenes introduce the story. First, following your initial shenanigans you find yourself inside a prison holding cell bumping into childhood friend Jackie Ma. There's past and present talk, before offering your help with any 'work' 'they' might have going on after discovering he's affiliated with the Water Street Gang, Jackie says he'll put in a good word for you with leader, Winston Chu.
Later, within one of the jail's interview rooms your identity's revealed, an undercover cop working for San Francisco's Police Department in conjunction with Hong Kong P.D. ,and so one adventure unfolds amid their attempt to infiltrate and ultimately take down local Triads.
Influenced by those you meet, haunted by history after your 18 year absence from 'home', a painful, difficult and extremely dangerous journey lays ahead.

Meeting up with Ma (Jackie) following the aforementioned he takes Shen to see Winston, who gives him his first 'jobs'; extorting night market vendors for protection payments and beating up some troublesome thugs. Familiarising us with Sleeping Dogs' combat system while also giving a preview of this living breathing island we are encouraged to explore.

Combat system controls felt responsive, fluid and great fun early on, but that soon changed when oddly they seemed sluggish, even sticky rather abruptly. However, this was found to be temporary with them eventually returning to their former glory. Whether it's just the learning curve, difficulty level ramping, or a change of character clothing ( -I did wonder briefly) who knows?

From here on out you do jobs for the Water Street Gang, thereafter other members of Sun On Yee hierarchy, all while working cases, gaining trust, taking out enemies, cleaning up these world city streets. Completing tasks awards Triad also Cop scores respectively, in-turn gaining experience to level up. Levelling both, rewards points unlocking new abilities or moves, many can be practised, others taught. XP usually accumulated through winning races and fulfilling favours levels up your 'Face', this automatically gifts Shen new unlockable skills sometimes ability enhancing items for his wardrobe. Much of this pays HKD as well, giving in-game currency for food, drinks, clothes, accessories, vehicles, even safe house furnishings.
Simply clicking the left thumbstick cycles through all currently available missions, highlighting route markers on the mini-map which I thought was neat implementation. 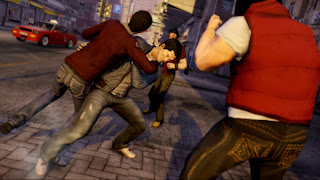 Health's boosted afterwards levelled using shrines and by consuming food also drink bought from vendors or vending machines.
The game saves periodically, manual saving is an option, you can too replay missions/start from last checkpoint -features you will likely find yourself utilizing quite often.

When working Wei will bust drug deals and plant bugs, in addition to deploying his expertise at hacking, armed/unarmed combat, Parkour or Freerunning also driving, occasionally going on dates too.

While roaming free Wei Shen can travel on foot, four wheels and two, or catch a taxi. Unfortunately there is no airport less aircraft to be seen but there are trams -you may also circumnavigate via boat.

Finally, are random events, collectables and secrets to find scattered throughout the environment, a social hub where players compete for records such as; 'Longest wheelie on a motorcycle', then there's 59 achievements.

Mostly the story is captivating and well written, though there are a few scenes where I felt either corners were cut or certain situations used to bulk -leaving them feeling somewhat pointless. That said, despite it being fictional, much research had obviously been done conveying through noticeable adaptions together with inspirations of real life.

Sleeping Dogs' dark Chinese underground theme is lightened with humour, be it killing classics on Karaoke or other events occurring such as; certain street vendors who shout and ask,

"Why don't you have a pork bun in your hand?"

This provides balance, yin to the yang.

Beautifully crafted, from citizens to settings, even weather. With incredible attention to detail, like rain drenched clothes or a bloodied body make for one visually stunning title. Animations are smooth, the occasional camera spasm and stuttering frame rate can be forgiven, given they raised no more than laughter.
Effects sound satisfyingly apt especially during combat also driving, I did wonder where that barking was coming from though? Dogs were never seen, nor sourced!
The soundtrack is varied, vast with multiple radio stations, sing-a-longs and moment echoing music.

Playing much akin to other open world action-adventure games similarities sit nicely alongside it's own assets.
Earlier I mentioned the Parkour/Freerunning which while perhaps not so unique is extremely well done. There's adrenalin pumping action hijacking that I've personally seldom come across before. Car chases and escapes are exciting though on the contrary you also actually get rewarded for driving safely.
Unavailable for purchase, still in many missions, weapons can be stolen or found, yet this game focuses more on self defence and unarmed combat then excels in doing so. Martial Art, fight clubs too are situated around the vicinity -you must try Karaoke. Also, while a flutter on the cock fighting is less appealing, even cruel, it's here -not to mention one addictive game of chance, Poker Mahjong.

Having recently finished the story (after approximately 17 hours) I am still completing cases and missed content, aiming for one hundred percent completion before even thinking about starting a new game. After which, there is downloadable content to check out.

Also available on PC, PS3 and OnLive, United Front together with 'Squeenix' have lovingly, cleverly crafted a familiar yet distinctive title containing an exclusive storyline well worth experiencing at least once.
Be sure to also visit the official website and forums for a wealth of interesting, useful information along with the latest updates. 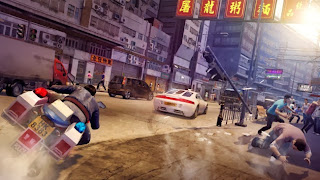 Note from the author: Sleeping Dogs is currently free for the month of January to XBOX LIVE Gold members, as part of 'Games with Gold' -make space!

Update: Today, 15 January 2014, is your last chance to get Sleeping Dogs for free as part of XBOX LIVE’s ‘Games with Gold’!