Also available on the Playstation Network and Steam with a spin-off game out for Android and soon said to be released on the App Store, Shoot Many Robots is a downloadable 4-player co-op, run-n’-gun action shooter currently free for December as part of Xbox Live's Games with Gold.

Published by Ubisoft this is the first original title from Demiurge Studios whom have until now worked behind the scenes on triple a games such as Borderlands, Rock Band, Mass Effect and BioShock.

Some of their previous work conveys, visually from the offset it immediately looks a bit like a flat-pack Borderlands though not without some feeling of depth. The sublime Rock/Blues soundtrack would not be out of place in a Rock Band playlist, nor the SCI-FI and machinery from the latter previously aforementioned.

Playing through the game, I could not help feel the nostalgia of classic counterparts within their genre, yet while being an ode to the likes of Metal Slug and Contra ( even so much as using a play on words to name a trail referencing the former ) Shoot Many Robots manages to remain fresh and unique throughout.

You take on the role of the star of the game P. Walter Tugnut, a loveable hillbilly who has been stock-piling his Recreational Vehicle with guns, ammo and beer awaiting the robot apocalypse.

It's a tale of carnage and chaos of which that does most of the story-telling as you take on hordes and waves of robots stopping from time to time to upgrade your arsenal and abilities. There is a brief tutorial at the beginning, then all hell breaks loose, no dialogue - no cut scenes - just bullets and robots, and many of them. 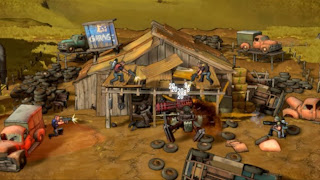 Learning as you go the difficulty is ramped at a steady incline despite initially being thrown in at the deep end. New weapons ( primary and secondary ) and wearable items ( with bonuses, abilities and melee attacks ) are dropped, discovered and ultimately bought with the in-game currency; nuts! Be sure to collect as many as you can in order to be able to purchase the best  upgrades on offer. There is some stock in store you may not be able to afford without much grinding, these can be purchased with real money but are not obligatory. Primary weapons have unlimited ammo, secondary weapons do not.

As you progress you will also level-up, this increases your health bar and also makes better guns and items available to find, unlock and ultimately buy. The higher your level the better the dropped unlocks become after turning your enemies into scattered heaps of junk. It is well worthwhile purchasing as high a level weapon as you can, what with them being more powerful than those you may have previously purchased. Checkpoints are spread throughout and your game is saved automatically after each stage. Some areas appear similar, but do seem to become more visually stunning the further you travel.

There are three difficulty levels, each with their own set of six roads leading to three or four destinations, complete with giant boss fights and armies of chainsaw wielding, rocket launching and flying bombing machines.

Shoot Many Robots can be played alone, but it really is a case of 'The more, the merrier!' so invite your friends or find an open lobby and team up with up to four other players to quadruple the fun and maximise the arcade-like experience.

Earlier stages can be replayed in-turn granting you the opportunity to level up some more, discover missing stock, collect extra nuts and also gain more stars to unlock further levels.

Twelve challenging achievements are here to attain, leaderboards to ascend and also some fun DLC to check out.

Controls are responsive and become intuitive when mastered. Tactics pay-off, learn to use the environment and 'destructibles' to your advantage - the level design isn't just layer upon layer of eye candy. Use your melee; some projectiles need to be shot, others can be punched acting as a counter-attack. Also bear in mind your combos, the more consecutive damage and destruction you chain the more nuts drop! Conserve your beer, sometimes evasion works just as well but do keep an eye on your health.
Team mates can be revived as can you, but pick and choose the right time to avoid all four of you becoming mincemeat. Slow and steady wins the... war against robots and saves humanity from the apocalypse? Try not to rush ahead and don't be afraid to back up. Finish off the enemies on screen before you run into more than you can handle. Of course this can be a little less possible when playing in a random lobby with no communication, however you are not tied to the same screen as your comrades as with some other multiplayer titles and can move freely. Perks of the job; power-ups are also dropped by the bots and temporarily gift you consumables such as health, secondary weapon ammo and speed enhancers.

'In what other game can you don a jetpack and beer-hat while playing air guitar with a flamethrower, all in your RV during The Robot Apocalypse?'

If you like what you've read, then round up your posse and download this terrific title - Ubisoft not to. I look forward to what's next from Demiurge and wonder... When is the cabinet available in all good amusements everywhere?