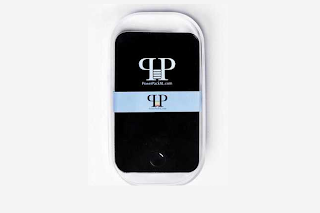 The PowerPackXL is an emergency phone charger not restricted to phones themselves. Also suitable for charging your other mobile devices on-the-go, such as an iPod or PSP they are both convenient and portable.

Packing an extra large 4000mAH Li-polymer battery it contains enough capacity to charge your smartphone fully up to four times on a single charge. This will of course differ for devices with larger batteries such as iPads.

Available in black and white models both with a chrome and glass looking frame, front and back respectively with holographic text these fantastic products have a premium look to them. They are of a solid build and the plastic materials chosen to construct them also make them surprisingly light in the hand. Small enough to slip in your coat pocket and not be too bulky, nor will they take up much room if dropped in a bag.

Your PowerpackXL will come neatly boxed and safely packaged in transit. Aside from the unit itself you'll receive a USB lead with five adaptors to charge both the charger itself (mini USB) and pretty much any major manufacturers' smartphone such as Nokia or Blackberry, lightning adaptors are now included. You will also find the instructions and a warranty. Using this emergency phone charger couldn't be easier, after making sure you have charged the unit itself by connecting it to either the mains or via a computer, simply unplug the PowerpackXL and connect it to your smartphone,iPod, iPad or PSP with the USB cable and correct adaptor before finally pressing the button. You can use either the left port for a fast charge, or the right for a trickle charge.The unit also has a control system in place to prevent overcharging. There are four LED lights on the PowerpackXL each representing 25% capacity and the unit will last weeks between charge. 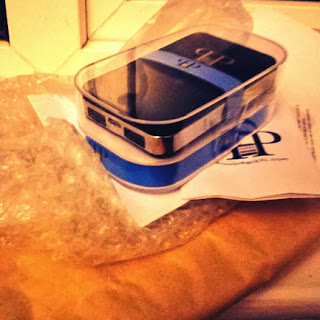 I tested the PowerpackXL itself, along with both my iPhone 4S and iPad Air. The results of the charging times and percentages can be found below;

As you can from my findings there appeared to be no difference in charge time or battery life charging the iPhone 4S by fast or trickle, with a slight difference charging the iPad Air.
As I mentioned earlier the battery size of course determines the result and I suspect the voltage plays a part also. The iPad Air is estimated to contains a massive 8,820 mAH [roughly] while the iPhone 4S encases a more modest 1430mAH battery. The PSP battery is 3600 so it is likely you will at least receive a full charge with a little spare.

I also tested whether the PowerPackXL holds it charge as claimed and while we are talking days, not weeks in between I found the unit to do so finding the same capacity I left it with.

The USB cable and adaptors supplied were all also of a solid build and fit snug and secure when connecting. My only gripe was with the length of the USB cable itself upon charging the unit at the mains. I struggled to find a wall socket where I would not have to leave the PowerpackXL dangling. However, there are pros and cons to consider and the problem can be overcome. First of all, a shorter cable means the likelihood of it getting tangled or splitting through wear and tear is almost null and void and where as you could possibly use an extender I found the unit sits well on a two or three way adaptor when charging at the mains. Whether either affect performance I am not sure. 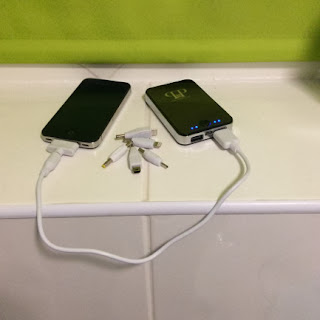 Whereas I probably won't be using the unit as frequently in my normal day-to-day life. Over the past week or so putting it through it's paces, I have found the PowerPackXL to be reliable, convenient and provide great results.
A welcomed and preferred alternative source of power to the unfortunately awful battery cases I have had the displeasure of using in the past. Whether you could use a backup battery often or occasionally this is a fantastic piece of kit for anybody with a smartphone and comes with both a money back guarantee and warranty. This is the first emergency phone charger I have actually bought and while I have noticed some of their competitors are cheaper and sometimes larger, the PowerpackXL looks great, does what it claims and the company do seem to run regular discount offers so keep an eye out for those.

Finally, but perhaps most importantly, I'd just like to thank PowerPackXL again for their assistance on the somewhat unfortunate and unforeseen bumpy road to writing this review. ( Of which they were not aware until recently ) and let you know from first hand experience their customer service is paramount, a trait which is always a pleasure to discover if called upon.