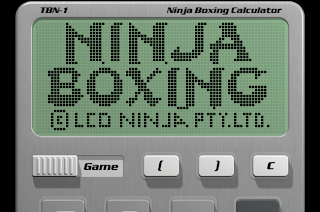 Currently available for iPhone and iPad for only [£0.69*] ( *Contains no in-app purchases or advertisements. ) Mac and PC versions will follow, a planned release for Android devices is expected early 2014 and there are even plans under way to manufacture a physical handheld version of the game/calculator.

I did not have a BG-15, nor did any of my friends, neither did we own a calculator with a hidden game. The only games we played on our calculators were inputting numbers, rotating them upside down and in-turn magically transforming them into letters forming words such as 5318008
In fact in all honesty it is in recent years I have (re?)discovered all these fantastic gadgets I'd missed. Needless to say I was excited for the release of Ninja Boxing Calculator and could not wait to just grace my iPhone's home screen with it's presence, even setting aside space long beforehand and placing the stock calculator app ( which I do, or did at least use fairly frequently ) in a folder.

That's the other thing I anticipated, the fact I was about to download a fully dual functioning multitasking application that was together fun and useful, a utility and a game. Paying homage to an arguably revolutionary gadget of days gone by, reinventing and bringing it back for everybody to enjoy and experience.

The simple icon sits well with Apple's new flat iOS7, upon launching Ninja Boxing Calculator you are presented with a beautifully polished brushed metal virtual calculator. The UI is clear and little accents such as the highlights and shadows of the buttons and the pressing animations show much love was put into this creation. While I'm on the subject of animations now may be a great time to mention how smooth the LCD dot matrix animations flow during play, not that it subtracts from the retro feel - it's just never looked so good! 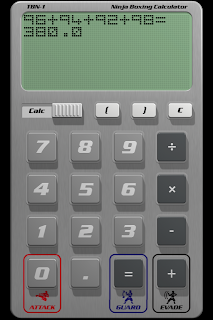 Similar to it's muse, there are three cleanly labelled controls to master, 'ATTACK' 'GUARD' and 'EVADE'. Guard; switches between high and low blocks and in-turn sets up your high and low attacks, while evade dodges stronger attacks. Win 99 fights through up to 8 rounds each of Ninja Boxing with increasingly intelligent and challenging computer AI. It is not all about button bashing and though you need to be quick, the controls are thankfully responsive as timing is of the essence.
At the top of the display are your and your CPU opponent's health bars, stamina{?] and a timer counting down the round. You win fights by knocking out your opponent. The count out timer is indicated by a succession of beeps and the game is over when you get knocked out. At the end of each game and on opening the application your high score and fight reached are displayed, alternating between a title screen and prompt invite to 'PRESS ATTACK TO START'
I'm not sure how authentic the sounds are, but you could have fooled me and they certainly ring a bell! Both a quick play game and a potential cause for some serious procrastinating it is a clever addition to your new calculator app. Speaking of which, this can be activated via the flick, or rather slide of a touch screen switch. Basic, but then I am one of the many who hasn't seen or used a scientific calculator since back in the day. I've tested the functionality and it works just as well as any other I've utilised, virtual or physical and I can still magically turn numbers into letters. (The evolution is in the brackets.) What is this sorcery? 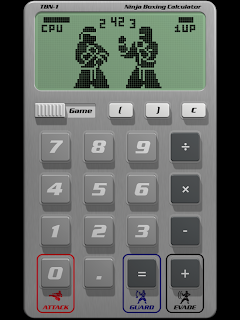 LCD Ninja have divided an application into a clever calculator and ridiculously retro fighting game. May the purchases mutiply! Ninja Boxing Calculator in my opinion is one of this year's most innovative releases on the App Store alone and though a late comer equals a worthy contender for Apple's App of The Year 2013.

The developers contacted me shortly after release and kindly gave me a code to redeem Ninja Boxing Calculator on the App Store. Since I had already planned to buy it after a brief exchange of messages they gave me the 'ok' to instead give it away. If you would like to win, all you need to do is send me a Direct Message on twitter [@Jamie84303] with the first correct answer to the following question;

What does LCD stand for?

To give people a fair chance to read this article and enter the giveaway, I will delay the competition and will not accept the first correct answer until 5pm on Monday - that's 5pm [17.00HRS] G.M.T on Monday the 9th December 2013, good luck!

"Your iPhone's Calculator app has just evolved into something most excellent!"