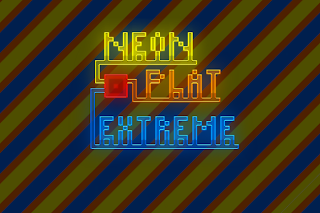 Emitting vibes of Mario Bros, NeonPlat Extreme [£0.69] is the latest release from Indie developer James Gamble to feature a version of his character PlatDude, both the first and biggest NeonPlat I've played.

This single-screen platformer packed with nine different modes is perhaps the most unintentionally festive game to launch on the App Store this year, just in time for Christmas.

Visuals are mostly linear brightly lit set upon a dimmed background with the foreground occasionally tilting. This coupled with the fact the brightness also seem to alter intermittently can be somewhat disorientating, clever additions to the already focus shifting gameplay. The walls, floor and ceiling are open in all but one of the modes if I recall correctly, a help and hindrance. 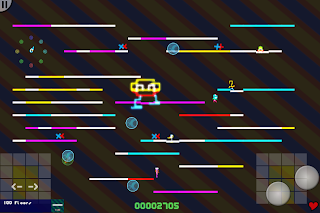 All-round common elements consist of you 'painting' platforms white as you land and travel upon and across ultimately making the ground beneath you disappear while dodging also destroying bad guys, together with occasional projectiles. The latter is executed of course by evasion and attack; sometimes simply jumping on enemies is enough, other times you will need to perform a slightly more elaborate series of actions to achieve the same  outcome.
Spheres, or as I like to call them 'bubbles' are [it seems] randomly generated throughout the play area. These can be collected and thrown at your gaseous foes trapping them, ready for you to hit. Completing these tasks gives you points. You will encounter an array of bizarre nemeses, ranging in size and kind, resemblant of to name but a couple, giraffes and giant clowns.
Three hearts indicate your lives, one is lost each time you are hit by an adversary or missile after which you are given a temporary shield sparing time to get your bearings.
Gameplay is fun, fast and addictive. A quick-play title you could easily end up spending much more time in than you may have intended. Some of my favourite game types so far include, Gems, Boss and Squishy. Despite the screen becoming rather busy at times, everything flows nicely with no lag and I've yet to notice any glitches.
Left and right arrows, jump and throw buttons are your smooth and responsive adjustable controls and I feel they could be bettered only by a scaling option.

There are pros and cons to experience on the device of which you choose to play NPExtreme. I preferred the smaller window of the iPhone and iPod touch, but the bigger virtual controls on the iPad - so maybe the iPad mini is the perfect platform? Touch screen at least, that said, the differences actually supply variation to the already sporadic so result in a bit of an unforeseen bonus.

All nine modes vary and part of the fun is in the learning. Can you master them all? Challenge yourself and other players beating your high scores and fight for your place on the leaderboards.

If you enjoy games such as Super Crate Box you should definitely check this out. Also available on Android OUYA and Windows.

Watch the promo video below for a sample of the gameplay and read the description for links to NeonPlat Extreme on other platforms. Last, but by no means least James kindly gave me a review  code for NPExtreme on iOS. If you would like to win it be the first to tweet me [@Jamie84303] answering the following question correctly and I shall DM you your prize - good luck and thanks for reading!