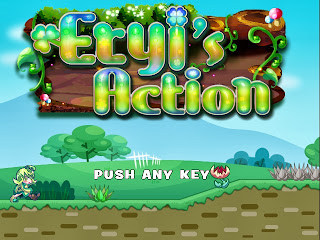 Eryi's Action is bizarre by name and nature. An extremely challenging Steam greenlight title that for the sake of your sanity is best played in short spurts, if at all.

You play Eryi, the protagonist whose melon she was so looking forward to eating was stolen by the evil villain Farta X, yes you read that correctly. And so you embark on a perilous journey to face the thief and retrieve one of your '5-A-Day'.

An interesting premise full of eleven stages and boss fights to meet your demise in, on a world map that is too... interesting.

With games like this and this is like games, fine lines are blurred between them being testing and downright infuriating, fun and blood, sweat and tears.

Indie developers Xtal Sword do not hide the sly and cunning traps awaiting you behind the cutesy graphics, on the contrary they pride themselves on them utilising them as a selling point. On one shoulder they are daring you to accept the challenge and on the other life coaching you into not giving up.

See there is no game over, the player decides when and whether to continue or not. There are checkpoints, your death score is recorded continuing each time you relaunch the game and there are achievements likely unlocked by accident. Trading cards are also available.

The presentation is polished enough with big eyed Anime inspired sprites set upon a busy and colourful backdrop scrolling as you go, giving depth to an otherwise 2D Platformer. Animations are smooth, sound effects are clear and the soundtrack while cheerful can become distracting and irksome. Controls are responsive if a little floaty and the collision detection takes a bit of getting used to. 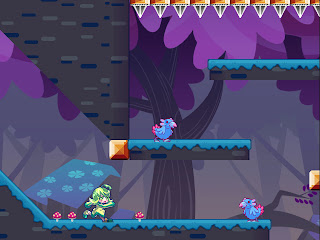 Similarities to other famous games of it's genre are somewhat noticeable, it is the gameplay that sets Eryi's Action aside and makes you sit up and take notice. The traps I briefly mentioned earlier spring up, fall down or come at you in a moments notice almost guaranteeing replay, whether that is to be considered value is down to the player's discretion an opinion bound to alternate often. Some obstacles are much easier to overcome a second time round, others may find you searching for a walkthrough after failing your umpteenth attempt. I am close to racking up almost 200 deaths and part of me is hoping there's an in-game fruit store.

At only [£3.99] if you are a fan of 2D Platformers and extreme video gaming it's an experience worth investing in. Prone to rage-quitting? I'd probably steer clear, I can't see Nyu Media taking responsibility for your tears, nor being liable for your broken computer. Talking of which Eryi's Action will run on pretty much anything with a monitor, keyboard and Windows version of some sort ...for as long as you want it to.

More information, non-refundable giggles and a free playable demo are available on the official website, so you can try before you buy.

"Eryi's Action; a jar of yeast extract. The question is - Do you want the spoon?"